Feel Bad About Your Body? Blame Your Friends 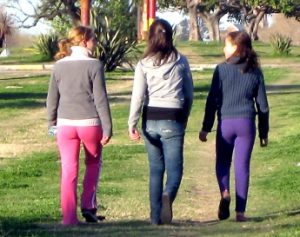 And, according to a recent study published in Sex Roles, you should choose them wisely. Why? It seems they have a pretty strong influence on how you see your body.

You think how your friends think

It’s no secret that women and girls tend to compare themselves based on looks alone, but experts wanted to know just how much a young woman’s circle of friends exerts influence over her sense of body image.

In the study, researchers looked at data for 75 pairs of female friends. The women were asked about weight loss, exercise, appearance, eating and body image.

Not surprisingly, women who had body image issues were the ones who felt pressure to be thin–regardless of whether or not they were at a healthy weight. The interesting part came when researchers found a young woman’s body concerns tended to mirror those of her friend’s. This suggests that perceptions of what her friend thinks–not what the friend actually thinks–influences a girl’s own concerns about her weight or body.

What the experts say

“Our research demonstrates that friends influence each other through at least three processes: perceived pressure to be thin; body-related talk; and perceptions. Although these perceptions are somewhat grounded in reality, i.e., close to the truth, they are more influential than reality.”

Wasylkiw and Williamson also found that talking about exercise was linked to less body dissatisfaction–further suggesting how talk of “positive” body-related subjects can have the same influence as negative ones among friends.