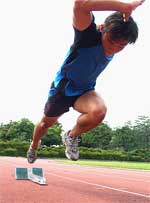 Anorexia Athletica is a constellation of disordered behaviors on the eating disorder spectrum that is distinct from Anorexia Nervosa or Bulimia Nervosa.

Although not recognized formally by the standard mental health diagnostic manuals, the term Anorexia Athletica is commonly used in mental health literature to denote a disorder characterized by excessive, obsessive exercise. Also known as Compulsive Exercising , Sports Anorexia, and Hypergymnasia, Anorexia Athletica is most commonly found in pre-professional and elite athletes, though it can exist in the general population as well.

Anorexia Athletica is more common in people who participate in sports where a small, lean body is considered advantageous. People suffering from Anorexia Athletica may engage in both excessive workouts and exercising as well as calorie restriction. This puts them at risk for malnutrition and in younger athletes could result in endocrine and metabolic derangements such as decreased bone density or delayed menarche.

In Anorexia Athletica, self-worth is tied to physical performance and although some concern may be present about the size and shape of the body, more emphasis is placed on how lean a person is as compared to his or her successful or professional counterparts. Anorexia Athletica may occur when coaches or parents pressure athletes to improve performance and encourage an increase exercise or training or dieting. Such behaviors may begin as voluntary but then progress to obsessive.

Symptoms of anorexia may be denied

Symptoms of Anorexia Athletica may include over-exercising, obsession with calories, fat, and weight, especially as compared to elite athletes, self-worth being determined by physical performance, and a lack of pleasure from exercising. Advanced cases of Anorexia Athletica may result in physical, psychological, and social consequences as sufferers deny that their excessive exercising patterns are a problem.

People with Anorexia Athletica may have anxiety and feel out of control in their life but that they can control their body and their weight. However, they will often feel guilty if they miss a workout, or don’t exercise “enough,” and therefore are out of control and at the mercy of this compulsory activity.

Treatment is usually required for this and other forms of anorexia because the conditon is very difficult to overcome and worsens over time.