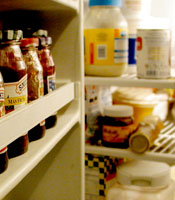 Night Eating Syndrome (NES), is an emerging condition that is gaining increased recognition among medical professionals.

Its clinical importance relates to obesity as many people who suffer from night eating syndrome overeat; being overweight or obese comes with many negative health risks.

Although not classified as an eating disorder, as a syndrome, night eating syndrome is considered a constellation of symptoms of disordered eating characterized most prominently by a delayed circadian timing of food intake. Night eating syndrome is is being considered for inclusion in the Diagnostic and Statistical Manual of Mental Disorders, Fifth Edition (DSM-V) as a Feeding and Eating Condition Not Elsewhere Classified (FEC-NEC).

An individual with night eating syndrome obsessively consumes more than half of his or her daily caloric intake after eight o’clock in the evening. More significant is the further finding that more than 33 percent of morbidly obese individuals (persons who are 100 or more pounds overweight) are affected by this disorder.

People with night eating syndrome tend to not eat in the morning and consume very little during the first half of the day. The majority of their calories are then consumed in the evening hours, so much so that sleep may be disturbed so that a person can eat. People with NES may be unable to get back to sleep after eating or may experience frequent awakenings throughout the night for feedings.

Unlike sleeping disorders, in night eating syndrome people are fully awake and aware of their eating episodes. It is distinct from bingeing disorders in that the portions consumed are generally those of snacks rather than huge meals. In addition, it differs from Bulimia Nervosa since there are no compensatory or purging behaviors present to offset increased calorie intake.

Night eating syndrome is often associated with depression, mood disorders, distress, weight gain, and obesity. People with NES may also have eating, sleep, or substance abuse disorders. NES tends to run in families and genes involved in regulating the normal circadian rhythm may be inherited.

According to Dr. Albert Stunkard MD, of the University of Pennsylvania’s Weight & Eating Disorders Program, night eating may be a way that people with an underlying mood disorder such as stress, anxiety or depression, may be trying to medicate themselves with food. “This snacking may be a way for these persons to medicate themselves,” speculates Stunkard, “because they eat a lot of carbohydrates, increasing serotonin in the brain, which in turn, leads to sleep.”

Registered Dietician Anne Fletcher notes that an evening snack (300 calories or less), if planned as part of the total day’s calories, can be part of healthful eating. Fletcher also recommends implementing a ritual or “meal-termination technique”—something that symbolizes the end of the meal. This might be having a cup of favorite tea, a brief prayer of thanks, or a short walk after the evening meal. A ritual helps the individual transition from one behavior (eating) to another behavior (eg, rest, preparation for bed).

The neurotransmitter serotonin is thought to play a role in night eating syndrome and there is some evidence that treatment with selective serotonin reuptake inhibitors (SSRI’s) may be beneficial. In addition, an anticonvulsant medication called topiramate has also been studied for the treatment of NES with promising results.

Other treatments for night eating syndrome include establishing a normal schedule, including getting a proper amount of sleep and incorporating sleep hygiene behaviors, as well as stress management, counseling, education, and limiting substances that disturb sleep such as caffeine and alcohol.