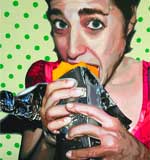 A basic definition of overeating is, simply put, excessive eating—consuming more calories than necessary and generally consuming in large portions that cause a person to feel uncomfortably full.

Overeating is not a specific diagnosis of any sort but may rather refer to a discrete incident of eating too much such as during holidays, celebrations, or while on vacation, or it may refer to habitual excessive eating.

People who engage in overeating regularly tend to eat when not hungry and may eat alone because they are embarrassed about the portions of food they are consuming. In addition, they may spend exorbitant amounts of time fantasizing about their next meal. Another sign that overeating has become a problem is if excessive amounts of money are wasted on food. In general, people who overeat are overweight or obese though people with normal body weights may overeat from time to time as well.

If overeating is accompanied by a feeling of lack of control and low self-esteem, this may be a sign that a person is actually dealing with an unhealthy relationship with food and that it could progress into a full-fledged eating disorder such as Bulimia Nervosa or Binge Eating Disorder. However, habitual overeaters may not engage in bingeing behaviors exclusively. Some overeaters display a “grazing” behavior in which they consume small amounts of food all day long which ends up causing them to take in too many calories than can be burned in a day.

Overeating can be compulsive or obsessive

Overeating becomes problematic when it manifests as a compulsive or obsessive relationship with food or a food addiction. Treatment for compulsive overeating may include behavior modification therapy. One program available that supports people in recovering habitual, problematic overeating using the context of an addiction is Overeater’s Anonymous (OA). OA is set up similarly to Alcoholics Anonymous (AA) and is a twelve step program in which members acknowledge that they are powerless over food. OA is open to anyone who has an unhealthy relationship with food and who wishes to reduce negative emotions.

The long term consequences of chronic overeating may include high cholesterol, diabetes, heart disease, hypertension, depression, kidney disease and stroke. It may also result in psychological stresses, anxiety, isolation, and low self-esteem. However, treatment and support is available for those who habitually overeat and recovery is possible .