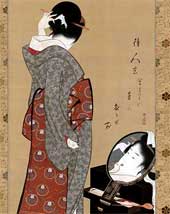 Body Image is defined as the subjective picture a person mentally creates about his or her own physical appearance. Body image may be an intellectual or idealized image of what one’s body is supposed to look like according to cultural norms.

Medically, Body Image is defined as the three-dimensional concept of one’s body and self as recorded by the cortex in the brain and includes propioception (perception of self by nerve endings in the body tissues) and its position in space.

The formation of a positive body image or negative body image is a complex process influenced by cultural socialization, interpersonal relationships, and the physical changes that can occur over a lifetime. It is formed by both a person observing themselves as well as through noting the reactions of others to their body. As a component of one’s Self Image, Body Image can significantly influence a person’s mental health.

A person with an eating disorder will often have a misconceived body image. Body image is an element of a person’s Self Image which is the idea a person has of their entire self and includes a self-assessment of qualities, characteristics, and self-worth. Therefore, body image not only has to do with one’s body shape and size, but also with a person’s relationship to their body ñ how they think and feel about their body and how they feel in their body.

Certain personality traits have been identified that may contribute to a negative Body Image. People found to have negative Body Images tend to be perfectionists and impressionable. They are easily influenced by the opinions, beliefs, and thoughts of others and are very concerned with how others perceive them. They also tend to compare their bodies to the bodies of others and of bodies, often unrealistic ones, that may have been enhanced photographically, in the media. A negative Body Image may be one contributing factor to the development of an eating disorder and it has been linked to depression, anxiety, and even suicide.

Conversely, characteristics of a positive body image have also been identified. People with a positive body image tend to appreciate their own unique beauty and define beauty in broad terms. They tend to appreciate the functionality of their body, and see it as an instrument, rather than just as an ornament. In addition, they selectively filter information they receive via media ideals or the commentary of others about their appearance. They tend to highlight the assets they perceive their body to have, while minimizing any perceived imperfections. People with a positive body image tend to have an accurate perception of their body shape and size and realize that how their body appears does not have any bearing on their character or value as a human being.