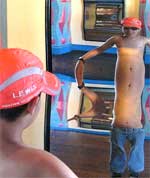 Distorted Body Image, or body image in general, is the way a person feels about his or her own body in terms of physical beauty and sexual attractiveness.

The term was coined by Austrian neurologist and psychoanalyst Paul Schilder but no consensus definition of what body image is actually exists. Regardless, the idea of a body image is widely known across multiple genres, such as in the media, psychology, and in medical practice.

Societal influences including the media’s portrayal of “ideal” bodies can affect the health of a person’s body image. The bodies of women in fashion, movies, and on television are often waif-thin while those of men are portrayed as being very muscular and lean. Repeated exposure to such images reinforces the idea of what is considered by society at large as beautiful or sexy.

When a person is dissatisfied with their body image they may try to change it. The distress caused by the difference between what they consider to be an ideal body and their current body can lead to mental disorders such as depression or eating disorders.

A negative body image may quickly become a distorted body image as a person takes extreme measures such as excessive dieting or over exercising, or even surgical interventions to alter it, but then continues to experience dissatisfaction with their body even after it changes. At this point their distorted mental image of themselves overrides their ability to see the objective reality of how their body appears.

Many people with eating disorders have a distorted body image. When asked how large they think they are, Anorexics or Bulimics will often grossly overestimate their size and weight. When asked to draw a picture of how fat their body is on a piece of butcher paper, they will draw a body much thicker than the reality. Therapists will often then trace the patient’s actual body onto the same paper so that the patient can observe the difference between the picture of their body in their head and the one that physically exists. Similar exercises can be conducted with a piece of string around the waist. With their distorted body image, people with eating disorders will overestimate how big their waist is. A therapist can then wrap the rope around the person’s waist so they can see the difference between what they think is true about their body and what is actually true.