Bodies Through The Decades: Media Influence On “Ideal” Body Type 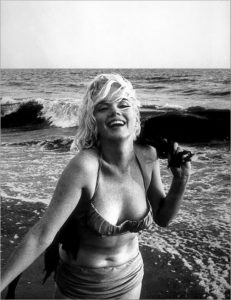 The average young woman’s perception of her body is “fat.” Studies indicate many people, especially women, measure their self worth based on appearance. The global influence of Western media puts tremendous pressure on both men and women to look good and fit an “ideal,” difficult-to-attain figure.

It doesn’t make things easier that the most sought-after body shape of our time tends to one that’s difficult to attain. Are we making any headway? Do “ideal” body images portrayed in the media come full circle?

Let’s take a look at body type through the decades:

A wide-eyed, flat-chested, and somewhat androgynous British teen model Twiggy came on the scene in the 1960s when slenderness became the most significant indicator of physical attractiveness.

In the 1970s there was a continued emphasis on weight loss and body shape. The media used thinner, less curvaceous models in photo shoots. Charlie’s Angel and notorious poster girl, Farrah Fawcett had one of the most sought-after body types.

The 1980s beauty ideal remained slim but required a more toned and fit look. This decade was known as the age of the supermodel, e.g. Cindy Crawford and Naomi Campbell. Dieting was no longer enough to fit into the correct size; there was now the added pressure of exercise (aerobics craze) to achieve the toned look.

More recently, in the 2000s, the ideal shape is one that may have to be purchased and cultivated through artificial means. In essence, women are buying an unattainable fantasy.

Dying to Fit in

Dangerous obsessions with beauty are only exacerbated by TV, magazines, billboards and social networking. Everywhere we look, we are bombarded with messages of an ultra-thin “ideal” body image. It’s so ingrained in our minds that it becomes more familiar to us than body types that we see in the real world. People want to “fit in” and therefore what appears as normal body type in the media creates a frenzy.

History shows us that Western models of the ideal female body have repeatedly cycled from voluptuous to slender for centuries (we can even see this pattern through the last 70 years). In 2012 the skinny craze persists, but “big as beautiful” is also making its way into the headlines as the curvier figure fights its way back (think Kim Kardashian).

Only time will tell what the next decade has in store. Perhaps continuing to educate the mass culture on the deadly and often cultish reality of ideal body image portrayed in the media will lead to a healthier, more informed society.