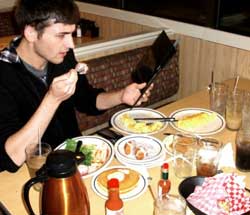 Among gay men, the International Journal of Eating Disorders estimates that up to 14% of men have bulimia, and as many as 20% have anorexia. Clearly, the proportion of males with eating disorders is significant.

Although some people may think that males experience a distinct form of eating disorders like Anorexia Nervosa and Bulimia, in fact they do not. Terms like “Manorexia” perpetuate the idea that men don’t suffer from the same type of Anorexia as females. However, the disorders are clinically the same, except for the fact that males cannot lose the ability to menstruate. The causes and treatments for male eating disorders are similar for as those for females, though males are much less likely to seek treatment because of the perception that eating disorders are a female condition.

In addition to suffering from well-known disorders such as anorexia, bulimia, binge eating disorder, and orthoexia, males may also be at risk for what has been termed bigorexia, also known as muscular dysmorphia or reverse anorexia nervosa.

In this condition, a specific form of body dysmorphic disorder, people tend to see their body as lacking in muscular definition. They will engage in excessive exercise such as weight lifting and other rigorous regimes with strict schedules; they may neglect relationships with others in preference for working out. They tend to look at their bodies in the mirror often and experience obsessive thoughts about attaining the ideal body. In extreme cases androgenic steroids may be used or other excessive and harmful measures may be taken in an attempt to enlarge and enhance the body.

Male eating disorders are something of a misnomer