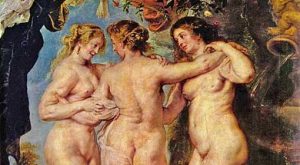 Researchers have determined that the unrealistically thin female body image frequently portrayed in the media and fashion magazines is considered to be less attractive by many men facing stressful situations.

In many western countries including the U.S., a higher BMI (body mass index) is associated with being less healthy. There may also be implications that heavier women have lower socioeconomic standing as more affordable food often contains high fat content.

In contrast, poorer nations that suffer from periods of severe food shortages may assign a higher status to women with a heavier body type which is linked to physical well-being, and wealth.

In the study which is published in the journal PLoS One, co-authors Martin Tovee and Viren Swami tested 81 heterosexual men between the ages of 18 to 42. The participants were divided into 2 groups, with 41 individuals taking part in back-to-back stressful activities such as a videotaped mock job interview, while the others waited quietly in another room.

Both groups were then asked to rate the attractiveness of various female body types (minus the faces) ranging from emaciated to obese. The stressed participants provided significantly higher attractiveness ratings to the normal and overweight body types than the control group. The men in the stressful environment group also suggested a broader acceptance of a range of sizes among body types rated as attractive.

The researchers have noted that the preference among most men for extremely slender women is out of sync with reality in western society, as the average BMI is increasing. The experiment also raises some interesting questions about the fluid nature of preferences for a certain body shape or image, and the ever-present impact of the media environment on individuals suffering from eating disorders.