Anorexics And Obese Individuals Shown To Have Opposite Brain Reward Response 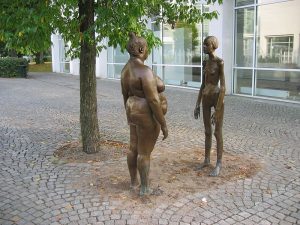 A new study published in the journal Neuropsychopharmacology has provided experimental evidence for opposite brain reward responses in individuals with obesity and anorexia.

The researchers wanted to determine whether or not rewards are perceived differently by the brain in persons suffering from eating disorders such as anorexia. They suspected that obese individuals would demonstrate a “blunted” response to reward compared to persons with anorexia who they believed would reveal an enhanced reward response.

The study involved 21 individuals diagnosed with anorexia (food restricting type), 19 persons suffering from obesity, and 23 control participants. The first test involved administering solutions of sucrose and artificial saliva in order to determine whether or not the participants experienced a difference in taste which they did not.

The second part of the experiment involved providing a conditioned stimulus that would cause the study participants to expect a reward. This was done while having the participants undergo a functional MRI which is used to measure brain activity by detecting changes in blood flow to certain regions in the brain. A sucrose solution was usually offered following a conditioned stimulus, but not always.

Compared to anorexic persons and control subjects, the obese individuals were less likely to associate the expectation of receiving a reward (in this case, the sucrose solution) with the conditioned stimulus.

Reward response of anorexic participants opposite to that of obese individuals

In contrast to the obese individuals and control participants, anorexic participants demonstrated greater sensitivity regarding reward activation in the orbitofrontal cortex of the brain, especially when anticipating the sucrose solution following the conditioned stimulus. When the anorexic individuals expected to receive the sucrose solution but instead were given the artificial saliva, they registered more error reward responses.

More research is needed to further explore the reward response mechanisms in the brains of individuals with eating disorders such as anorexia. An increased understanding of the role of the neurotransmitter dopamine could also offer hope for the development of future treatments.