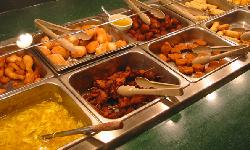 Eating disorders are a spectrum of mental disorders that lead to consequences involving the extremes of weight loss or weight gain. The major types are anorexia, bulimia and binge eating disorder.

Anorexia is the medical term for a failure to take in enough calories to maintain body systems. The word refers to the symptom of not eating, the disorder is more properly referred to as anorexia nervosa to distinguish it from just not eating (as from another medical cause, such as cancer treatments).

Anorexia nervosa is characterized by an irrational fear of gaining weight and a delusional body image perception. Unlike in anorexia, these patients do not “lose their appetite” but actively restrict food intake because of a mental disorder.

More properly bulimia nervosa, this condition is more common than anorexia nervosa and consists of a cycle of ravenous hunger followed by purging (throwing up) food before it is digested. These patients do not typically look starved but may have other consequences from frequent vomiting – acid erosion of the teeth, scarring of the esophagus and tearing of stomach and esophageal linings.

Patients may adopt other behaviors related to calorie count and excessive exercise is common. Nutritional status is an issue and especially acute dehydration or electrolyte disturbances after purging or exercising.

This disorder is thought to be linked to depression and a failure in impulse control. More than in anorexia, this condition mimics an addictive behavior and patients may have a substance abuse problem or other behaviors of impaired impulse control.

This disorder is characterized by an inability to stop eating when the body signals it is full. It is episodic and not all meals will be of the binge type. However, binge eating occurs several times a week over six months to merit the diagnosis.

Patients do not purge or exercise excessively, and despite this, many do not gain weight. Many do though, and the disorder has the most health consequences when weight is out of control and the binging is excessive.

There doesn’t seem to be a compulsive element or an abnormal craving for food as an emotional “high” and this distinguishes it from “food addiction.”

Pica is a disorder where patients consume odd or inappropriate foods with no nutritional value. This is not usually classified as an eating disorder because the genesis is thought to be primarily a psychosis or an underlying mental defect, whereas primary eating disorders are associated with, but not dependent upon, depression or anxiety disorders. However, the distinction isn’t always clear cut. And patients may have an actual nutritional need for the things they consume, such as eating metals because of an iron deficiency disorder.

Compulsive overeating is the proper term for a “food addiction.” The common language used for this type of disorder is a food addiction, and it does have many elements of an addictive behavior. Patients may feel they are out of control or they may turn to food as a way to deal with other problems. Depression is a common associated condition.

Food faddism consists of an inappropriate focus on one food group or “trend” in food, either for perceived health benefits or as a reaction to unsupported fears. It is not a diagnosable condition on its own, but a symptom of some other psychological problem. It is difficult to separate out someone who is a food faddist from a normal concern for health and nutrition. The distinguishing feature is the amount of time, mental energy and money spent pursuing their “ideal” diet, and whether they have an emotional attachment to the behavior. It may not even be treated unless other consequences emerge.