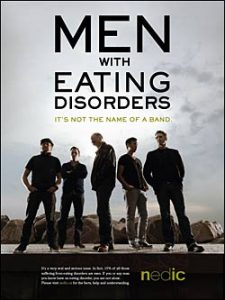 While eating disorders seem to be an inherently female problem, experts say it’s time to give males some more attention.

For a long time, males were thought to comprise only about 10 percent of eating disorder cases, but now that number seems to hover around 25 percent for anorexia or bulimia and 40 percent for binge eating.

“Raising awareness is probably the most important thing,” he said. “We have to lower the bar a little bit about being concerned when men lose a lot of weight.”

Recently, the National Eating Disorder Information Centre launched a campaign to bring more attention to the issue, with a poster carrying the caption, “Men with Eating Disorders: It’s not the Name of a Band.”

Woodside notes that, developmentally, skinny teenage boys tend to be the norm, and that parents might not think twice about a son’s thin frame.

Studies have shown that men with eating disorders are more likely to also have mental health problems, like anxiety and depression, making them an even more vulnerable population.

Dr. Ted Weltzin, medical director of eating disorders services at Rogers Memorial Hospital in Oconomowoc, Wisconsin, says that men develop eating disorders for the same reasons women do: to have a sense of control, to fit in or to cope with poor body image issues.

And health experts agree that, in general, males are largely being ignored when it comes to prevention and treatment.

“It’s been a longstanding gap in the areas of understanding early intervention and treatment in eating disorders,” said Merryl Bear, director of the National Eating Disorder Information Centre, a nonprofit organization based in Toronto. “Men have been neglected in that area.”