Is Jennifer Lawrence Not “Hungry Enough” For The Hunger Games? 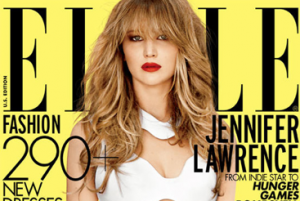 By Hollywood’s ridiculous standards, Jennifer Lawrence is considered a “fat actress.” Critics are calling her seductive, womanly figure a bad fit for her role as Katniss Everdeen in the Hunger Games, who fights for scraps of food in the series. Lawrence, who maintains a healthy and athletic frame, defends her size to be a better role model for her fans.

Lawrence has been resilient despite the criticism of Hollywood. She was recently featured on the cover of Elle magazine and was quoted saying:

“I’m never going to starve myself for the part. I don’t want little girls to be like, ‘Oh, I want to look like Katniss, so I’m going to skip dinner.'”

In a separate interview, she joked at the fact that “I’ll be the only actress who doesn’t have anorexia rumors”.

Setting a Good Example for Her Fans

The 22-year-old starlet refuses to abuse her body because she seemingly has no body fat to speak of. The Hunger Games series is wildly successful, and whether Katniss looks hungry enough should hardly matter to fans lining up to see the film.

Lawrence proudly rocks a beautiful and healthy frame despite the pressure of Hollywood to appear on the brink of starvation. By normal standards, she is quite thin and unquestionably gorgeous, but that doesn’t seem to be enough for some Hollywood critics.

“She seems too big for co-star Josh Hutcherson,” said Jeffrey Wells of Hollywood Elsewhere. “She’s a fairly tall, big-boned lady who’s maybe 5’8, and he seems to be something like 5’7. Hungry, the one constant in Katniss’ hard-scrabble life, barely even seems to register.”

Hopefully, Jennifer’s persistence to maintain a healthy weight will change some of Hollywood’s body image issues. While some actors choose to sacrifice their health for a role, like Tom Hanks in “Castaway” and Renee Zellweger in “Bridget Jones’s Diary,” Lawrence prefers to send a positive message to her fans.

“I was trying to get my body to look fit and strong, not thin and underfed,” she told Elle.