It is Healthy Weight Week.  Because I have written about HWW for the last three years (see archives of Tasty Morsels) I won’t spend a great deal of time explaining it here.  In a word HWW was developed over 20 years ago by Francie Berg to raise awareness of the damage that diets can cause and to dispel the myth that a person’s health can be measured by their weight.  To find out more about HWW and or to engage in an online discussion about continuing to use the name Healthy Weight Week in the future you can read Marsha Hudnall’s recent post in the ASDAH Blog. 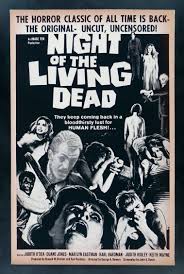 What I really want to talk about are zombies.  I am a relatively new convert to the zombie apocalypse culture having almost thrown up when I saw Night of the Living Dead with my best friends in Junior High School.  I was 12 when we all traipsed off to the movie in a pack.  Giddy with excitement and reveling in the freedom that came with being out of Elementary School, there was not a parent in sight to monitor us.  As we piled into the movie theater WITH BOYS, I really had no idea what movie we were going to see.  That was inconsequential.  The point was in the adventure.  Until…the zombies appeared on the screen. THAT totally freaked me out.  So when The Walking Dead series came around, I ignored it having no interest in activating that living dead trauma that had laid dormant since 1968.  Until my partner started watching it and I found myself getting totally sucked in.

It isn’t just the zombies that I find mesmerizing; it really isn’t ever about the zombies in these movies.  It’s about the way the humans interact with each other about the zombies.  What could be an opportunity for everyone to join together and fight a common enemy is predominantly squandered, as greed and fear result in in-fighting and back stabbing.  Yes the zombies are compelling to watch but the human behavior about the zombies is magnetically repulsive.  Maybe it is because I am so fascinated by people and what we do when we are at our best and at our worst that has me glued to The Walking Dead like a zombie to a lung, but glued to it I am.  Perhaps it’s the metaphor of today’s overly bigoted and opportunistic society that keeps me tuning in week after week.  As I watch the “biter” population grow episode after episode, impervious to any intervention by the non-infected humans, it becomes clear that the situation is hopeless.  Hopeless and depressing, especially as the people continue to kill each other off for their own personal survival or gain of power.  I don’t usually get hooked on depressing television shows…this one is different.  I guess the zombies are kind of cool.

But why am I writing about zombies in a size acceptance blog? Well, here’s the deal.  Lately there has been an increase in articles appearing in my inbox warning me and the rest of the world that the fat people are proliferating and we should all be Very Very Afraid. I can not help myself…it feels like I am watching an opening montage for World War Z as headline after headline cautions me of the growing number of fatties and the scourge of obesity.  Yes they actually call it a scourge!

Fat people are taking over the world!

“Number of fat people in US to grow, report says Three-quarters of all Americans will be overweight or obese by 2020”

Fat people are taking over the universe!

Fat people are destroying the planet!

Nothing could be worse than “turning” into one of them!