I recently received an email from my niece.  Some of you may remember the piece I wrote several years ago about my niece’s graduation entitled, Body of Knowledge. In the piece I wrote about how delightful the tradition of caps and gowns are in the graduation ceremony because they take away any emphasis on the student’s body and appearance and instead focus on their accomplishments.  My niece makes no secret of the fact that she thinks her Auntie Deah is a bit idiosyncratic but I know she loves me despite my wackiness and strident political views.  I also know that she continues to struggle with her own conflictual relationship with her body and learning how to feel positive about herself despite her father’s continual toxic messages that she is too fat to be loved or successful.  She holds on to her body hate like it is her job, her duty, to keep trying to be thinner even though she is a runner and physically fit and active.  She listens patiently as I go on my occasional rant about body diversity and self-acceptance and readily admits that while she agrees with the premise intellectually, she just doesn’t believe it could ever apply to her.  So after clicking on the ink to a recent Huffington Post article that she sent me, I felt a surge of hope that perhaps some of what I am doing and saying is seeping its way into her awareness; and that she can see that I am not the only one out here who is passionate about helping people, especially women, join the radical movement of loving our bodies.

Taryn Brumfitt made a splash in the social media world when she posted this atypical before and after photo. 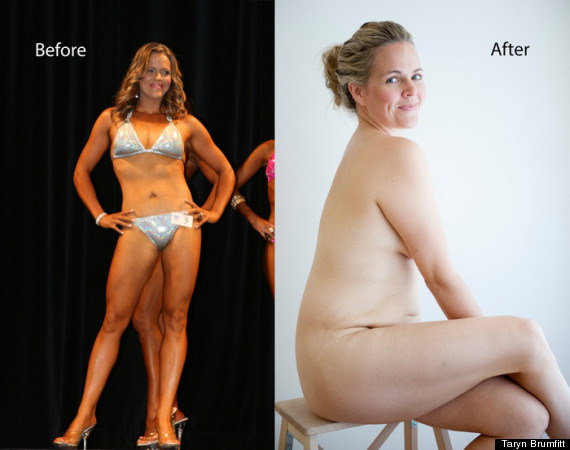 Not Your Typical Before and After Photo

And no, the photo is not atypical because the before photo shows that she has three legs while the after photo has her sporting the more conventional two legged pose, it is unusual because the after photo shows a woman whose body is not sculpted or tanned.  The article, written by Jessica Samakow,  discusses Tarynn’s campaign to help women learn to embrace their bodies and includes this video that tells us more about the process she went through to arrive at this place.  And yes, it is a fundraiser because Ms Brumfitt is now on a mission to create a documentary about improving our body image, one woman at a time.  But I’m not blogging about Ms Brumfitt’s Kickstarter campaign to recruit donations.  That is entirely up to you. I’m blogging about this because I noticed something that really disturbed me….O.K. here is some background information first.

Recently I contributed to a fundraising campaign for another body image documentary in the making. I first became aware of Lindsey Averil’s and Viridiana Lieberman’s  film, Fatitude, on a listserv that I belong to and was asked if I was interested in being interviewed for the film about my part in the size acceptance movement.  I expressed my interest and even though my appearance in the film was thwarted by a malfunctioning camera on the day we were supposed to shoot my clip, I continued to follow the film’s progress and donated money to the project.  Similar to Brumfitt’s campaign, Averil also had a promotional trailer.

The trailer for the film, Fatitude, was greeted with an outpouring of hate mail and vicious bigoted comments and threats directed at the filmmakers and people seen in the trailer.  (To read the specifics of the attacks check out this piece on FFF by Atchka.)  Now, I rarely get involved in responding to trolls. I don’t like giving them any attention because I feel it fans their flames of narcissism and escalates their behavior.   And this time was no different.  But then almost immediately following that incident, I participated in a Flash Mob in San Francisco. It was a joyful, body positive event organized by Juicy D. Light (my interview with Juicy can be read HERE) and was an uplifting experience for all of us.  Julie Wyman, the woman behind the documentary, Strong, is working on a documentary of the event, but in the meantime a shorter video of the Mob, filmed by Ian Carruthers of Foolish Tree Films was posted on You Tube.

Once again, like sharks to chummed waters, the hate comments appeared and they were horrific!

”I once watched a special on national geographic about humpback whales. I think this was it actually.”

“The children were shivering, hiding in their beds, While visions of doughy single mothers danced in their heads.”

This time I broke my rule and engaged with the trolls with a piece of my HAES® mind. But, as I imagined, it didn’t change anything and just riled them up for more discourse. I turned my energy to spreading the word about helping to fund Fatitude via my social media networking and felt a bit of satisfaction when I heard that the original fundraising goal had been reached.  But here’s the thing…I went back to the Embrace video and did a Google Search and found that Taryn Brumfitt had gotten enormous amounts of positive media attention for her brazen act of defiance and postive body image message. I was thrilled to see that she was on numerous television shows and written up in newspaper articles, all of which were quite supportive of her stance!  Not a single trollish barb to be found!  Not even one joke about how her name sounds like bum fit and or that the writer of the HuffPo article was probably sympathetic because her last name, Samakow, could be construed as bovinian in nature.  Nope, free as a bird!  So I looked at the comment section on her video. I loaded them ten at a time. Do you know what I found? Silence.  The absence of fat bashing remarks and challenges, that her video promotes the end of the world by supporting the terrifying notion that women can love their bodies, was deafening.  The most fat shaming comment of the bunch was:

“She doesn’t look bad, seeing as how she’d just had a baby. She’s a slender woman with some sagging. Good underwear would fix that. I’m thinking this whole article is a tad inflated…but not the subject of it.”

So…why the discrepancy between the videos? The ONLY factor I can “narrow” it down to is the “fatness factor.”  Taryn is a beautiful woman in both of her photos, and granted the after photo is not a body that is typically touted as coveted in our culture. It is only in comparison to the fatter women in the other videos with the exact same message, that we can see how even in the body image movement, thinner gets the inner track to positive attention, compassion, empathy, and perhaps most important, permission to love her body.  I wish I could build a bridge connecting the creative minds behind Fatitude, Flash Mob, and Embrace.  Can you imagine how powerful that triangle would be in battling the societal belief that loving your body is good but ONLY if you still weigh in at an “acceptable” weight?

Please join me for a book signing event at Great Good Place for Books 6120 La Salle Ave. in Oakland on July 31st!

Only five more days left to receive your free gift in honor of International No Diet Day when you purchase a copy of the body positive book, Dr. Deah’s Calmanac on my website !Or, if you purchase your copy of the Calmanac from Amazon, Barnes & Nobles, FFF, or MOMTL just send me your order confirmation and I will send you your free gift.

In California, if you purchase a copy of the Calmanac, send me a selfie of you and the book with your mailing address, I will send you your free gift right away!  Offer is good until May 20th! ([email protected])

And at In Full Swing:  A plus size clothing store:  5937 College Avenue near Claremont Ave. in Oakland’s Rockridge District.