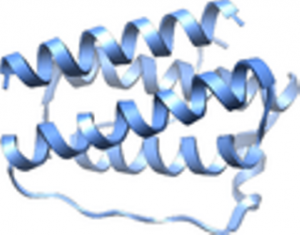 According to the Centers for Disease Control (CDC), obesity affects approximately one-third of the adult population in the United States. Obesity is generally defined as having a body mass index (BMI) greater than or equal to 30, or having 25% or greater fat mass for males or having 30% or greater fat mass for females. Obesity is a risk factor for a host of diseases with potentially negative outcomes including diabetes, stroke, and heart attack.

Much research has been conducted to determine the cause of obesity and potential treatments. One attractive link was discovered in rats in the 1990’s – the link between leptin and obesity.

Leptin is a hormone produced by adipocytes (fat cells). Low leptin levels in the blood signal an increase in feeding and a decrease in energy expenditure. But the relationship between leptin and obesity is not as simple as it seems. Many people who are overweight have abnormally high levels of leptin. Some theorize that overweight and obese individuals have developed an insensitivity to leptin much as diabetics develop and insensitivity to insulin.

When working properly, leptin tends to decrease appetite and serves as a “lipostat,” providing a read on the body’s energy stores. It is thought to inhibit feeding by counteracting the effects of Neuropeptide Y and anandamide, chemicals that stimulate feeding behaviors, while increasing the synthesis of alpha-MSH, an appetite suppressant.

Because leptin and obesity appear to be related, much research has been conducted to determine if leptin or a leptin analogue could be used to treat obesity. Although there have been some positive results in people with a genetic mutation for leptin, results have been less effective in overweight and obese individuals.