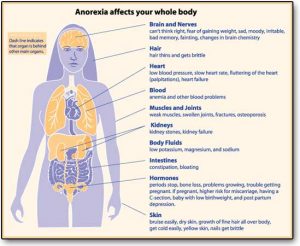 A report done by Medical News Today highlights what English and Swedish researchers found while studying genetics in extremely overweight and underweight subjects.

The study published by the scientific journal Nature said that people who carry extra copies of part of chromosome 16 tend to be extremely thin. Other studies have shown that those who were lacking the gene were 43 times more likely to be morbidly obese. In “normal” people, each parent supplies one copy of the gene but sometimes extra genetic material can cause multiple copies of the gene, or missing material can have the reverse outcome.

The leader of the study, Philippe Froguel said about the findings, “This is the first genetic cause of extreme thinness that has been identified. It’s also the first example of a deletion and a duplication of one part of the genome having opposite effects.”

The researchers extended their conclusion to those children diagnosed with failure to thrive, but this can also be extended to eating disorders as well. Doctors may suspect an extremely thin person is bulimic or anorexic, but then be able to test for these isolated genes to determine if there is a genetic cause.