Teens And Young Men Consuming Too Many Sugary Drinks 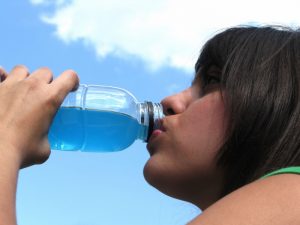 According to a survey from the Centers for Disease Control and Prevention, about half the American population consumes a sugar sweetened beverage each day, with young men and teens drinking considerably more than the suggested amount.

17,000 Americans were interviewed by CDC researchers in order to obtain information about their diets. The researchers discovered that sugary drinks were causing many people to consume a disproportionate number of calories in their diet, with teens and young men the most affected. Boys aged 12 to 19, admitted to drinking the equivalent of two 12 ounce cans of soda every day, taking in approximately 273 calories from the beverages alone. Men aged 20 to 39 consumed on average, 252 calories a day from the sugar-loaded beverages.

This is far more sugar than recommended for a healthy diet. In fact, the American Heart Association recommends no more than 450 calories a week from sugary drinks, which translates into about 3 cans of soda. The sugary drinks are especially significant, since they are the only foods and beverages that have been linked directly to obesity.

The Center for Science in the Public Interest (CSPI) is teaming up with city health departments from Los Angeles, Boston, Philadelphia, San Antonio, and Seattle to address the problem. The American Heart Association and the American Diabetes Association are also involved. The campaign will be aimed at the general public, and will attempt to convince people to reduce their consumption of sugary beverages.

In the past, similar campaigns have resulted in criticism and legal charges from the American Beverage Association. An attempt to tax sugar sweetened beverages in New York City led to a lawsuit, with the manufacturers arguing that sugary drinks are just one contributor to the high rates of obesity in the US.