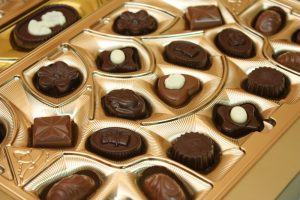 A new study published in the journal Archives of Medicine has discovered that individuals who consume chocolate a few times per week generally have a lower body mass index than people who stay away from eating chocolate.

The survey study was carried out by researchers at the University of California at San Diego. In total, 1000 participants were involved, ranging from 20 to 85 years of age.

The researchers noted that those individuals who consumed chocolate 2 or more times per week (in moderation) had a lower body mass index (BMI) than people who rarely ate chocolate. As expected, those individuals who frequently consumed lots of chocolate were found to have a higher BMI than participants who seldom ate chocolate. The participants who consumed chocolate maintained on average a lower BMI, even though they generally took in more calories each day.

Researchers believe that the antioxidant compounds in chocolate contribute to an improvement in lean muscle mass which translates into a lower overall weight. It is already established that the antioxidants contained in dark chocolate possess health benefits including helping to lower blood pressure and cholesterol. More research is required in order to determine whether or not chocolate affects how calories are metabolized into fat. This would provide further understanding of the process involved in reducing the BMI among those participants who ate chocolate.

Critics of the study point out that the researchers in this case have only revealed an association between chocolate and lower body mass index. More studies would be beneficial in order to examine other aspects of the participant’s lifestyle including diet and exercise. In the meantime, it appears that consuming dark chocolate in moderation may be advantageous for one’s health as well as enjoyable.