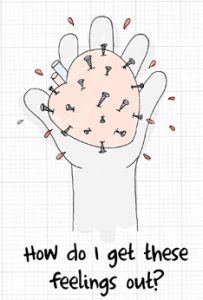 The Profile Does Not Always Match the Patient

Why Adolescents Participant in Self-Harm Behavior

To most people the answer they would come to conclude is that the suffer is trying to cause themselves to feel pain. When in fact just the opposite is true. “Patients describe a feeling of release that comes when they cut or burn themselves,” “They’ll cut with a razor or a scissor blade. Sometimes we’ve even had kids who will take the tip of a paper clip and gouge holes. To burn themselves, they’ll heat up a metal object and press it to their skin, or they’ll use cigarettes.” Said Rebecka Peebles, MD, an instructor in pediatrics at Stanford and a researcher.

1,432 patients, ages 10-21, who were admitted to the hospital’s eating disorders program. Just over 90 percent of all the patients were female, three-quarters of them white, with an average age of 15. Among the 40.8 percent identified to be physically harming themselves, the average age was 16. Many of these patients had a history of binging and purging, and 85.2 percent of the self-injurers were cutting themselves.

Before the treatment program began, the researchers believe that the adolescents while being screened for the study were not asked the right questions. Perhaps that is because the questions being asked by the adolescent’s physicians need to be updated. Researchers found that the participants were very honest during the study and did not hide anything about their self-harming behavior or eating disorders.