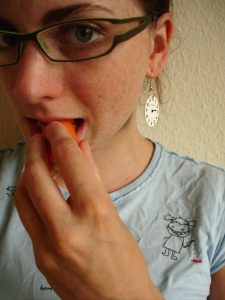 A new study by University of California, San Francisco (UCSF) researchers has determined that weight gain may be prevented without dieting through the use of simple mindful eating and stress reduction techniques.

The study which is published online in the Journal of Obesity provides more clues into the link between stress and the stress hormone cortisol and the connection to eating behavior and weight gain.

The 47 women who participated in the 4 month study were divided into two groups. 24 women were randomly chosen to received mindfulness training and practice regarding their eating behavior. The other 23 women were placed in the control group. All the participants were given some basic information about healthy eating and the benefits of exercise. None of the women were on calorie-counting diets and all exhibited signs of being chronically stressed and were either overweight or obese.

The women in the first group received nine weekly sessions of mindfulness training. During 2½ hour classes, they learned stress reduction techniques and received instruction on how to become mindfully aware of their own body sensations such as hunger, fullness, and taste enjoyment. The women also participated in an intensive seven-hour silent meditation retreat.

The researchers asked the women to set aside 30 minutes each day for meditating, and to observe mindful eating practices during their meals. A survey was used to determine the women’s psychological stress levels before and after the study. The women’s fat and cortisol levels were also measured, with the researchers focusing on changes to deep abdominal fat as well as the women’s overall weight.

Compared to the women in the control group, the obese women who received mindfulness training had a significant decrease in their cortisol levels. Those women who were the most proficient at mindful observation of their body’s cues regarding hunger and satiety experienced the greatest reductions in abdominal fat. They were also able to maintain their weight reduction.

The researchers note that this small preliminary study does prove a strong link between cortisol levels, body awareness, stress, and abdominal fat. Further research is needed to determine why the overweight women did not experience the same weight loss benefits as the obese women.