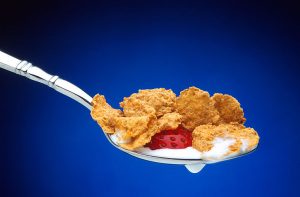 A new study from the Environmental Working Group (EWG) has determined that many brands of breakfast cereal specifically marketed for children contain so much sugar that they should be classified as desserts.

The EWG checked the nutritional contents of 84 popular children’s breakfast cereals. They identified the 10 “worst” cereals based on the amount of sugar as a percentage of weight.

They determined that one cup of Kellogg’s Honey Smacks (which tops the list at nearly 56 percent sugar by weight) actually contains more sugar than a Hostess Twinkie. 44 other children’s breakfast cereals were found to have more sugar in one cup of cereal, than 3 popular chocolate chip cookies.

Advertising by the manufacturers of the sugar laden cereals is generally aimed at convincing parents that the breakfast cereals marketed for children are “fun and taste good”, while the high sugar content is usually promoted as harmless.

The EWG noted that the breakfast cereals which have the highest amounts of sugar are among the most profitable for the companies that produce them. Some manufacturers spend in excess of $20 million a year promoting their product.

The EWG revealed that only one quarter of the breakfast cereals monitored in the study actually met the voluntary guidelines which are supposed to limit the amount of sugar by weight. The federal Interagency Working Group on Food Marketed to Children currently recommends that no more than 26 percent of sugar be added by weight. The EWG would like to see that amount reduced even further.

Nutritionists have called the sugar content of children’s breakfast cereals “an outrage”, suggesting that parents should be offering their kids healthy nutritious choices for breakfast instead.