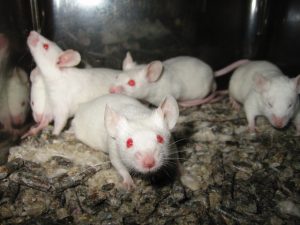 In a recent animal study published in the September issue of Cell Metabolism studied the metabolic impact of socialization. Researchers found that “after four weeks in (a socially) enriched environment, the animals’ abdominal fat decreased by fifty percent,” according to Lei Cao, of Ohio State University.

“I’m still amazed at the degree of fat loss that occurs,” says Matthew During of Ohio State. “The amount that comes off is far more than you would get with a treadmill.”

White fat, the type of fat that stores energy, switches more easily to brown fat, the type that burns energy, in socially immersed mice. “It’s usually hard to induce the switch from white to brown fat,” During says. “It takes months of cold — you really have to push — and it doesn’t induce brown fat to the same degree as what on the surface appears to be a relatively mild change in physical and social environments.”

During translates this to human interaction. “It’s not just a sedentary lifestyle and high calorie foods, but an increasing lack of social engagement,” During says.