Scientists May Have Found Genetic Cause In Eating Disorders 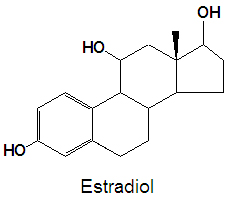 For the first time, scientists have discovered a possible biological reason for the eating disorders during puberty. A form of estrogen called estradiol may be the cause. The groundbreaking pilot study led by Michigan State University found that influence of one’s genes on eating disorder symptoms was much greater in pubertal girls with higher levels of estradiol than pubertal girls with lower levels of estradiol.

“The reason we see an increase in genetic influences during puberty is that the genes for disordered eating are essentially getting switched on during that time,” said Klump. “This research was trying to figure out why. What’s turning on the genes during puberty? And what we found is that increases in estradiol apparently are activating genetic risk for eating disorders.”

Knowing that estradiol plays a role in the development of eating disorders could ultimately open the window to new treatments, said Klump, past president of the Academy of Eating Disorders.