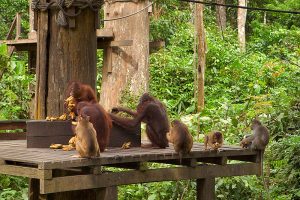 Research recently published in the journal Biology Letters by Rutgers evolutionary anthropologist Erin Vogel, explores the survival of endangered Indonesian orangutans during periods of food scarcity, and the implications for humans who are coping with eating disorders and obesity.

It is believed that scientists may be better able to understand obesity and eating disorders in humans, from studying orangutans which are considered to be closely related to humans. Orangutans are also the only non-human ape that gains fat during times of plenty, and uses the stored fat during periods of food scarcity.

It has been determined that the orangutans only store fat when consuming high protein and high calorie diets. When calories are restricted (such as during food shortages), the orangutans first use up their stored fat, and then draw on their protein or muscle reserves in order to maintain body functioning until food becomes plentiful again. This biological process is similar to that seen in individuals suffering from anorexia who severely restrict calories in their diets.

Orangutans are dependent upon the availability of low-protein fruit for their survival. Their ability to withstand periods of protein deprivation, and the subsequent protein cycling which occurs when availability of food sources varies, may contain valuable information regarding issues with our own food choices and dieting. The research also raises some questions regarding the effectiveness of high protein/low carbohydrate diets frequently employed by humans trying to lose weight.

The research involved studying the effects of protein cycling in the orangutans for a period of 5 years. The orangutans were able to avoid starvation over a period of time, by consuming higher protein vegetation (when their diet of low-protein fruit is non-existent) and using their own body fat and muscle reserves.

The orangutan population is currently threatened in Indonesia due to illegal logging and land clearing of the rainforest for the purpose of growing lucrative palm oil plantations.