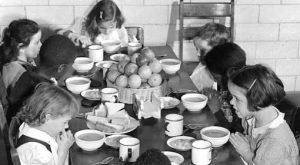 Congress has agreed upon a number of rules regarding the nutritional content of school lunches in the US.

The Agriculture Department had been asking Congress to update the rules by limiting the number of servings of French fries and adding more tomato paste to pizza. This was in an effort to conform to recommendations that children eat more fruits and vegetables (especially leafy green vegetables), and consume fewer starchy vegetables such as potatoes.

Other recommendations included lowering the amount of sodium consumed.

There was also the controversial issue of schools claiming that pizza counted as 2 servings of vegetables due to the presence for example, of mushrooms and tomato paste. Other organizations had expressed concern that removing potatoes from the menu, would also deny the children the benefits of essential nutrients, vitamins and potassium.

Overall, the end goal for everyone was to ensure that kids consuming school lunches had access to healthier food choices based upon sound scientific evidence.

The Institute of Medicine was consulted in order to make sure that any changes to the rules were based on scientific fact. Comments were also welcomed from the public and food industry. It was hoped that the rules introduced in January of this year, would be clarified and nutrition standards updated.

Congress agreed that the requirements for the number of fruits and vegetables in the children’s diets should be increased. However, they were less convinced regarding the issues of potatoes and tomato paste. In the end it was decided that removing potatoes from school lunches would be counter-productive, and deny the kids of essential nutritional foods. Pizza with too much tomato paste appeared unappetizing and difficult to eat, and taking it off the menu would again, restrict the diet unnecessarily.

The challenge for schools, involves incorporating more of the expensive fruits and vegetables into the children’s school lunches while essentially nothing else changes.