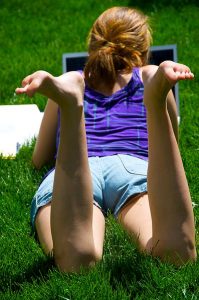 The study results which appear in the journal Health Communication offer a glimpse into the possible reason why the eating disorder websites are popular within the anorexic community, and why current therapies for anorexia often fail to facilitate change among individuals with the serious eating disorder.

The researchers originally extended an invitation to 300 bloggers on “pro-ana” websites; both men and women. Approximately 10 percent responded, all of them women between the ages of 15 to 33. About two thirds of the participants lived in the U.S.

In the end the researchers interviewed 33 female bloggers from seven different countries where anorexia is prevalent. The individuals identified certain motivational reasons why they blogged on “pro-ana” websites, including benefitting from the freedom to self-express in order to cope with stigma, lessening their sense of social isolation, and finding acceptance in the form of non-judgemental support and understanding from others who have gone through a similar experience.

Critics of “pro-ana” websites have cited disturbing content that encourages young people to adopt unhealthy eating habits, and idolize unrealistically thin bodies. Bloggers frequently post photos of their starved bodies as well as expressing themselves through song, poetry, and the written word. Attempts to shut down “pro-ana” websites have met with only limited success.

However, the researchers in this study note that many anorexics describe interactions with family and friends as extremely stressful. These individuals received unconditional support and encouragement from others within the “pro-ana” environment, regardless of their situation (including when they made the choice to stop self-harming and enter treatment). The websites were viewed by many anorexics as a safe community in which to belong.