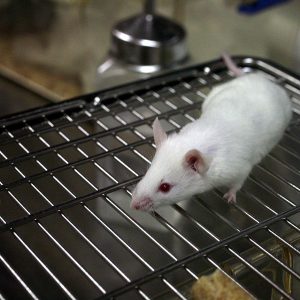 A new Canadian research study has examined the effects of deleting 2 muscle genes in mice. These same mice that could usually be observed actively running about 8 kilometres per day on a wheel appeared instead to be tired and lethargic. The researchers determined that there was a 90 to 95 percent drop in their level of physical activity.

The 2 muscle genes manipulated by the scientists, control an enzyme known as AMP-kinase. This enzyme works during exercise to facilitate the process of making food energy available during periods of physical activity. The mice without the 2 muscle genes were found to have fewer mitochondria, which act as a form of cellular powerhouse. AMP-kinase functions as a regulator for the mitochondria. Without the usual energy boost from AMP-kinase, the laboratory mice quickly became tired, sat in their wheel or rocked back and forth.

The researchers note that the muscle genes deleted in the mice, are identical in humans. They suggest that these findings are especially relevant for individuals with Type 2 diabetes, as AMP-kinase is responsible for the process by which muscles utilize glucose during exercise.

Other interesting findings from this study, link the challenges faced by overweight or sedentary individuals beginning an exercise program with the consequences faced by mice lacking the 2 muscle genes. The scientists explain that factors such as inactivity, obesity, and age can also cause a reduction in AMP-kinase. Fortunately, in the case of sedentary individuals, continuing to exercise will increase the production of AMP-kinase, resulting in easier and more enjoyable physical activity.

This 6 year study from McMaster University in Hamilton marks the first time that researchers have removed 2 muscle genes in mice, revealing the role of AMP-kinase during exercise. Further research is required in order to determine whether the mice without the muscle genes become susceptible to diabetes or obesity, and if AMP-kinase production in these mice can be stimulated through exercise.

Study published online in the Proceedings of the National Academy of Sciences.