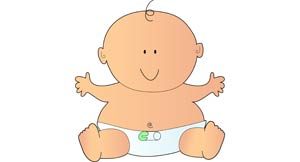 According to a study done by the Center for Disease Control (CDC) one-third of baby’s age nine months are already overweight. The concern is that these baby’s who are already overweight will develop eating disorders at an early age. An alarming number of young children are already suffering from anorexia and bulimia. Not to mention that obesity in young children is also growing at a rapid rate this causes self-image issues and health problems in kids.

“One 2009 paper published in the journal Pediatrics found that babies who gain weight rapidly in the first six months of life are at increased risk of being obese by age 3. Another study, published in April 2010 in the Journal of Pediatrics, found that heavy 6-month-olds are more likely to be obese as 2-year-olds.”

Does This Set the Stage for an Eating Disorder

We all know children can be cruel to each other especially during the preadolescence and adolescent stages. The majority of adolescent and teen eating disorders such as anorexia are caused by peer pressure and low self esteem by being picked on by peers.

How to Stop it Before it Starts

Infants should be feed on a schedule either breastmilk or formula. Overfeeding to quite a crying baby is not a good idea nor is feeding an older baby food that is considered “junk food” such as cookies. Baby’s should be introduced to healthy foods and eating plans as early as possible.