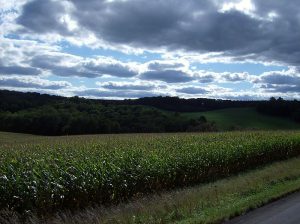 A new report from the California advocacy group CalPirg has noted that American taxpayers are currently subsidizing commodity crops, such as corn and soybeans, that often contribute to the ingredients used in the manufacturing of junk food.

American taxpayers paid out more than $260 billion in agricultural subsidies between 1995 and 2010. The report identifies subsidies in the amount of $16.9 billion for high fructose corn syrup and other additives found in junk food, whereas healthy fruits and vegetables are grown by U.S. farmers with little, if any, financial support from taxpayers.

The situation is put into perspective in the recently published report, “Apples to Twinkies: Comparing Federal Subsidies of Fresh Produce and Junk Food.” The authors of the report determined that American taxpayers would receive $7.36 for buying junk food, but only 11 cents to purchase apples if the government subsidies went directly to the public.

The report raises some interesting questions and concerns during the present climate of deficit reduction in the U.S. Some individuals wonder whether the government subsidies are an appropriate use of taxpayer dollars if they are used to fund unhealthy or less nutritious food choices.

Others question the allocation of government subsidies for foods that are contributing to the obesity epidemic in America.

John Anderson, a senior economist with the American Farm Bureau, has responded to the issue by stating that farm programs (such as government subsidies) do not contribute to unhealthy eating patterns or obesity. He is concerned that any change to subsidy programs would ultimately hurt American farmers and do nothing to improve the health of consumers. He notes that altering the government subsidies would not result in any cheaper retail prices for food and therefore would have no impact on the diet of consumers.