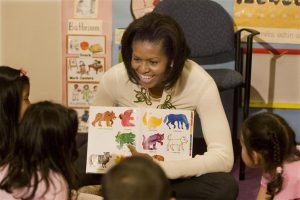 Michelle Obama, the wife of the US president, has announced the first nutritional overhaul of school meals in the United States for 15 years during a visit with elementary school students in Alexandria, Virginia.

Agriculture Secretary Tom Vilsack and well-known chef and television personality Rachael Ray were also present at the school when the announcement was made.

The guidelines for school lunches include less sodium, more whole grains, and a greater selection of fruits and vegetables. There will be a limit to the number of calories per meal, and most trans fats will be banned. All milk served in the school lunch programs will be low-fat and flavored milk will be non-fat.

First Lady Michelle Obama noted that nutritional lunches will contribute to students learning better. She also commented on the fact that school lunch programs should not undermine the work of parents as they make every effort to provide their children with nutritious food at home.

The new guidelines apply to school lunches that are subsidized by the federal government. A child nutrition bill implemented in 2010 will assist school districts with some of the increased costs associated with the guidelines. While some of the changes will occur relatively quickly, others may be phased in over a period of time.

Some schools are already endeavouring to improve the quality of school lunches. However, there are still many instances of poor nutritional content including the use of high calorie foods and large amounts of fat and sodium.

These nutritional guidelines apply to free or low-cost school meals that are provided to children from low-income families. However, the 2010 child nutrition bill will also extend nutritional standards to other unsubsidized foods that are sold in US schools such as snacks from vending machines. The specific guidelines for these foods are expected to be comparable. The nutritional guidelines have been proposed as a result of 2009 recommendations to fight childhood obesity.