Lower Risk Of Stroke In Women Who Follow Diets High In Fruits, Vegetables, And Grains 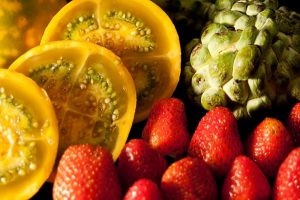 According to researchers from the Karolinska Institute in Sweden, females who consume lots of fruit, vegetables, and grains in their diet reduce their risk of stroke. This is true for women who have a history of cardiovascular disease as well.

The researchers determined that a diet rich in fruits and vegetables (50 percent) as well as whole grains (18 percent), tea (16 percent), and chocolate (5 percent) contributed to the total antioxidant capacity in the diets of the women who had the highest TAC and no cardiovascular disease history. Among those in the 5 groups (no cardiovascular disease history) the women with the highest TAC reduced their chance of having a stroke by 17 percent.

The risk of stroke was also reduced in women from the 4 groups with a cardiovascular disease history. Those with the highest TAC in their diet lessened their risk of stroke by approximately 46 to 57 percent.