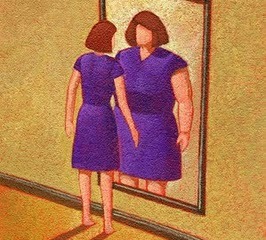 In a recent study at Brigham Young University in Utah, healthy women looked at images of models in skimpy bikinis. Not all of the models were model thin some were too thin, some average and some overweight. The women who viewed the images were all of average weight and had a normal amount of self-confidence and esteem.

How the Study Worked

The women were hooked up to a machine so that their brain would show the basic emotion they were feeling as each woman viewed the photos. When the images of the overweight women were viewed, every single woman in the study had the same reaction. “The brain area called the medial prefrontal cortex (the front part of the brain linked with strong emotions such as unhappiness) showed increased activation in all of the women.” The researchers surmised that each of the women in the study were “Merely imagining that they might be overweight seemed to lead women to question their sense of self.”

While each of these average weight women reacted negatively to the images of the overweight woman, researchers believe that most women see themselves through the eyes of others. Therefore, it is more than possible to theorize that a woman could be at risk for developing an eating disorder when they see thin woman either in person, magazines, TV, or even on the internet and that could raise questions about their own body image. Therefore, leading to an eating disorder this theory is even more likely in teenager girls.