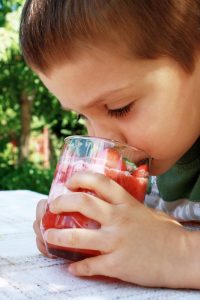 Many popular fruit drinks that are intended for consumption by young children contain as much sugar as found in a candy bar.

A recent report from the Rudd Center for Food Policy and Obesity blames the fruit drink manufacturers for misleading advertisements. They claim that the fruit beverages are marketed to children as juice, when in fact, they contain little more than water and sugar. Many fruit beverages also contain artificial sweeteners, flavorings, and coloring.

Critics point out that some parents may mistakenly assume that the fruit beverages are healthy choices for their children. Added labels claiming that the drinks are “natural” or contain vitamin C can also misinform consumers.

Nutritionists are concerned that the fruit drinks may not be perceived as treats, and that parents may inadvertently be offering them to their children on a regular basis, contributing to an overload of sugar, and potential weight gain. The sugary drinks can unintentionally add excess calories to a child’s diet which may already be high in sugar from other food items such as cereals.

The American Heart Association recommends that children consume no more than 15 grams of added sugar per day. Many fruit beverages contain at least that amount of sugar in one serving alone.

Manufacturers of the fruit beverages have berated the report, claiming that fruit drinks should not be singled out as the sole cause of obesity in children. They also note that advertisements during kid’s television programming for these products have decreased by 96 percent since 2004.