Fried Foods Not Necessarily Harmful To Your Health 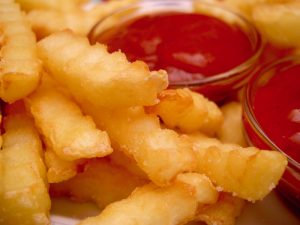 According to a new study from Spain, consuming fried food may not necessarily be harmful to your health.

Researchers in Spain studied 40,000 people for a period of 14 years. They determined that the quantity of oil used when preparing fried food made no significant difference to the health outcomes of the participants in the study regarding the incidence of heart disease. This remained true even for those people who frequently ate fried food. These results are contrary to the general perception that regular consumption of fried foods leads to heart attacks and other cardiac illness.

It should be noted however, that the research participants in Spain fried their food in fresh oil each time, and used healthier products such as olive oil or sunflower oil. The research study which was recently published in the British Medical Journal provides additional evidence that the type of oil used to fry food does make a difference to our diet and that switching to healthier oil will result in a positive health benefit.

For some time, dieticians and nutritionists have been suggesting that people avoid using saturated fats such as butter, lard, or palm oil to fry food in order to avoid increasing the risk of heart problems. This study appears to substantiate these claims.

Too much fried food still a health risk

However, although the type of oil used to fry food can make a difference to one’s health, fried foods are still high in calories and often contain salt. Researchers caution against eating too much fried food as the excess sodium can lead to high blood pressure and too many calories may contribute to obesity.

It is therefore suggested that for most people, fried foods should be consumed just occasionally, and prepared using one of the healthier oils.