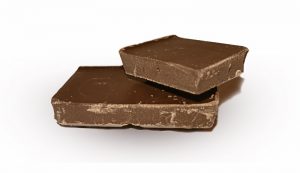 Scientists at Wayne State University have determined that consuming small quantities of dark chocolate is as beneficial to the body as energetic activities such as skating, jogging, or cycling.

A compound found in dark chocolate has been linked to positive results in mice, comparable to that of sustained aerobic exercise. The compound called epicatechin appears to increase the number of mitochondria in cells, boosting endurance and improving performance. The scientists noted a particular benefit for the heart and skeletal muscles.

While more research is required in order to substantiate these same results in humans, it appears that epicatechin combined with aerobic activity provides the best resistance to age-related muscle wasting. Even the mice that did not exercise received some benefit from the epicatechin, raising the possibility of dietary intervention in the battle against age-related physiological decline and serious metabolic disorders such as diabetes and obesity.

Dark chocolate and unsweetened cocoa are already known to provide many health benefits when consumed in moderation. This study examines some of the physiological reasons behind these findings.