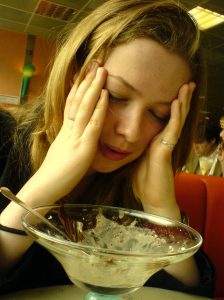 Using experimental models, researchers from Boston University School of Medicine have determined that blocking the cellular protein known as the Sigma-1 receptor reduces episodes of binge eating and causes binge eaters to slow down their food consumption.

The groundbreaking research which is published online in Neuropsychopharmacology offers important evidence behind the regulatory process involved in appetite control and binge eating.

It is believed that as many as 15 million Americans may be affected by binge eating disorder. Individuals who suffer from this condition exhibit compulsive and excessive behaviors around food consumption, often gorging on large quantities of “junk” food despite the known negative consequences. Binge eaters frequently experience adverse physical, emotional, and social effects from their actions.

The disorder has been described as closely resembling substance dependence since the regulatory mechanisms that usually control hunger and appetite do not appear to be working properly. Likewise, persons with binge eating disorder frequently go through feelings of distress and withdrawal when they give up “junk” food.

The participants were then given a drug to block the action of the Sigma-1 receptor. It was determined that the drug reduced episodes of binge eating by 40 percent, removed the incidence of risk taking behaviors, and resulted in the binge eaters slowing down their food intake.

The researchers note that there is an abundance of Sigma-1 receptors located in the prefronto-cortical regions of the brain where evaluation of risks and decision making takes place. It is believed that binge eaters could possess an abnormal number of these cellular protein receptors. Further research may open up the possibility of potential new therapeutic treatments for binge eating disorder.