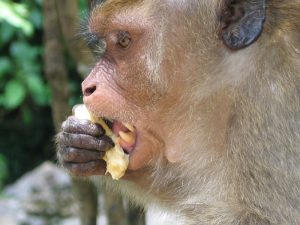 A 23-year study conducted by researchers at the National Institute on Aging determined that restricting the number of calories consumed did not increase the lifespan of rhesus monkeys.

Rhesus monkeys possess a similar genetic code to humans, and they have a comparable physiology and median lifespan. Experimental results gained from using rhesus monkeys have useful implications for humans.

Previous research indicated that restricting calories had a beneficial effect on the lifespan of a variety of animals. A study by researchers at the University of Wisconsin published in 2009 also appeared to offer evidence that restricting the number of calories provided to rhesus monkeys extended their lifespan.

However, this new comprehensive study published in the August 29th edition of the journal Nature offers additional information and raises questions regarding the validity of the Wisconsin study regarding increased lifespan.

No significant difference in lifespan associated with calorie-restricting diet

For the new study, 121 rhesus monkeys were split into 2 groups. One group contained monkeys aged 1 to 14, and the second group was made up of monkeys aged 16 to 23. The monkeys were either fed a normal diet or a diet containing 30 percent fewer calories.

A number of factors may have been responsible for the earlier results of the Wisconsin study. Scientists have pointed out that the diet of the non-restricted monkeys contained very large amounts of sugar (similar to that consumed in the average American diet). They were also allowed to eat as much food as they wanted which may have led to severe overeating as the cause of death. There were also genetic variations in the rhesus monkeys used in the Wisconsin study.

The new study offers compelling evidence for the importance of replicating research results in order to ensure scientific accuracy. As far as diet and lifespan is concerned, researchers suggest following a balanced, healthy, nutritious diet in order to maximize health and wellbeing.