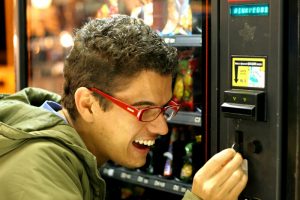 Researchers at Yale University and the University of Southern California have determined that the brains of people who are severely overweight may be wired differently for high calorie foods when they experience low blood sugar levels.

A total of 21 individuals were involved in the study. This included 5 obese participants, 9 normal weight participants, and 7 people to act as experimental controls. The scientists studied the blood flow in the brain using MRI, focusing on the regions of the brain that regulate behavior and impulse control.

The participants were shown pictures of both high and low calorie foods, as well as non-food pictures. During this time, the participants’ insulin and glucose levels were controlled and manipulated in order to examine the effects of low blood sugar levels on their desire for high calorie foods.

The researchers have suggested that people who are overweight should consume small, regular, healthy meals in order to maintain normal blood sugar levels. They also note that obese individuals are especially vulnerable to the constant food images provided through television and other media sources in today’s society.

Further research is required with more participants, in order to examine whether the brains of obese people are wired differently, or if this is an effect of the obesity itself.

Source: The Journal of Clinical Investigation