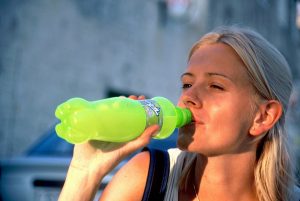 A new study published in the February 7th issue of the journal Respirology has linked the consumption of soft drinks such as soda with an increased risk of developing asthma and chronic obstructive pulmonary disease (COPD).

The Australian study involved surveying approximately 17,000 people regarding their soft drink consumption habits. The comprehensive survey included a wide range of sodas and soft drinks including coke, lemonade, Powerade, Gatorade, flavored mineral water, and a variety of other types of sodas.

While the study does not prove a cause and effect relationship between soda consumption and asthma/COPD, there does appear to be a “dose-response relationship” in which individuals who drink greater quantities of soft drinks have an increased risk of suffering from asthma and COPD. The more soda consumed, the greater the risk.

Researchers are unsure of exactly why soft drink consumption is linked to an increased risk of certain lung diseases. Some have hypothesized that the sugar content in many soft drinks predisposes individuals to obesity which also increases the risk of a person developing asthma and COPD.

Others have suggested that drinking a large amount of soda is often a good marker for poor attention to health and diet. This could be linked to a number of other factors which would increase a person’s risk of developing lung disease.

A number of earlier studies have also highlighted the unhealthy properties of soda, including increased risk of type 2 diabetes and (among diet pop drinkers) an increased likelihood of suffering a heart attack or stroke.