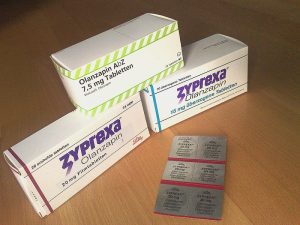 A new study by researchers at the University of Chicago has resulted in the discovery of a medication that works to improve the rate of survival in anorexic mice, and may offer hope of a potential treatment for severe anorexia nervosa in humans.

In the study, the researchers tested the drug olanzapine (also known as zyprexa) on mice that were raised in conditions that cause activity based anorexia symptoms. In other words the mice were given restricted access to food and provided with an exercise wheel.

Treatment with small doses of the antipsychotic drug olanzapine significantly improved the survival rate of the mice despite variations in their environment or the age of the laboratory mice. Similar testing with the antidepressant drug fluoxetine (prozac) did not produce the same results.

Anorexia remains a potentially deadly illness, and there are no medically approved drugs available to effectively treat the eating disorder. The use of off-label medication (medication that is usually used for one particular illness, but is also prescribed in order to treat other medical conditions) is not uncommon practice.

Some anorexic patients have been prescribed off-label psychiatric medications but little scientific research exists in order to test the effectiveness of this practice.

Researchers of this study published in the journal Neuropsychopharmacology hope that further research will reveal more information about how olanzapine works on the brain in order to lessen the effects of anorexia. Clinical trials are reportedly taking place to test the use of olanzapine on human patients with anorexia.

Additional scientific research would enable researchers to modify olanzapine in order to develop a medication that specifically targets anorexia. This would also help lessen the stigma some patients experience from taking a medication better known for treating psychosis. Many individuals with anorexia resist taking medication that can directly produce weight gain or cause sedation, two common side effects with olanzapine.