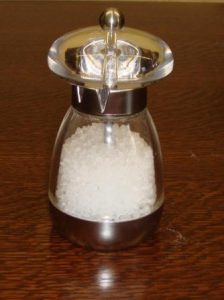 According to a recently released report by the Centers for Disease Control and Prevention (CDC), a large number of Americans are consuming way more salt (sodium chloride) than is recommended by dietary guidelines.

The Federal dietary guidelines which were released in 2010, suggest that most Americans consume no more than 2,300 mg of salt per day. However, this limit is set considerably lower for certain population groups which tend to be more reactive to the effect of salt induced hypertension.

For example, African Americans, all people aged 51 and older, and anyone diagnosed with high blood pressure, diabetes, or chronic kidney disease should be taking in no more than 1,500 mg of salt each day. This adds up to almost 48 percent of the US population. Of those individuals who should be limiting their salt intake, 99 percent are in fact, exceeding the guidelines.

In addition to this, the original 2,300 mg of salt per day limit, most likely only applies to a very small percentage of the US population (.2 percent). Individuals within this subgroup include competitive athletes, and those workers exposed to high temperatures such as firefighters or foundry workers.

One of the challenges facing those individuals who are trying to limit their salt intake, lies in the fact that three quarters of the salt consumed in our diet, comes from sources outside the home. Restaurant meals and packaged foods are often very high in sodium. While it is advisable to avoid adding too much salt to home prepared food (either during cooking or at the table), only one quarter of the sodium consumed in total actually comes from our personal use of the salt shaker.

Consuming too much sodium increases a person’s risk for developing high blood pressure, heart disease, and stroke. Individuals struggling with obesity which is already linked to type 2 diabetes and other severe health complications, need to be especially vigilant regarding their salt consumption.