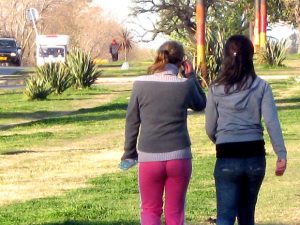 In a large-scale study using data on more than 7,000 participants, researchers from the University of Bristol found that six in 10 13-year-old girls are afraid of getting fat.

Only four in 10 boys expressed fear of gaining weight, the research found, and girls were twice as likely as their male peers to be “extremely worried” about gaining weight.

The study also found that one in three girls was upset or distressed about her weight, compared with one in five boys. Half of the girls in the study said they avoided fatty foods, while only one-quarter of boys reported this type of behavior.

More disturbing still were the study’s findings about disordered eating habits: one-quarter of girls reported engaging in behaviors like restricting food intake, fasting, skipping meals or throwing away food in the past three months. Only one in seven boys showed these behaviors.

Since the study included adolescents between the ages of 13 and 15, the researchers said the findings are significant because disordered eating habits in early adolescence can lead to more serious problems when young people reach their later teen years.

“We found a connection with certain behaviors and higher weight two years later, which has important public health implications for the prevention of obesity,” said Dr. Nadia Micali, a scientist from the National Institute for Health Research.

Bingeing most common in girls

While the research showed that laxative use at this age is rare, binge eating affected girls and boys fairly equally. And those who did engage in bingeing behavior were 50 percent more likely to be overweight and had twofold increased odds of being obese.

Increased efforts to identify young people who have the behaviors shown in the study are crucial, the researchers said.

A press release on the study concluded:

In what is believed to be the first report of its kind outside the USA, the researchers found that the patterns of eating-disorder behaviors seen amongst young teenagers in the population, although not amounting to full eating disorders, had negative consequences on young people’s social, psychological and physical health.

The research is published in the Journal of Adolescent Health.