Trick Your Brain Into Eating Healthy: 5 Tips From A Famous Food Psychologist 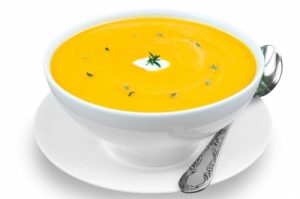 Developing a healthy relationship with food has less to do with willpower and control and more to do with environmental and social cues, according to Cornell food psychologist Brian Wansink.

In a recent interview with Mother Jones, Wansink explains that being “mindful” of our food choices often leads to a cycle of feeling deprived, desperately trying to eat healthy and then eventually overeating.

One of Wansink’s main philosophies centers around the idea that it’s not about what we eat – but how much we eat – that truly matters. “Tricking” the brain into making better choices can be achieved with some simple environmental tweaks, he believes.

Here are five ways to set yourself up for success:

Serve from the stove

Instead of putting pots or dishes of food on the table, load up your plate from the stove. In Wansink’s research, he found that people who did this ate 19 percent less than family-style eaters.

Scale down your sandwich bag size

In an experiment where some moviegoers were accidentally given snack-sized Ziploc bags full of Wheat Thins and M&M’s (instead of regular-sized sandwich bags), the individuals with the smaller bags ate less – even though all participants were given the same amount of food.

3. Sit by the window in restaurants.

Wansink talks a lot about how proximity to food affects eating behaviors. His research suggests that sitting by the window in a restaurant makes you 80 percent more likely to order a salad from the menu.

Eating with your back to the food (at a buffet or near the appetizer table, for example) also decreases food consumption.

In Wansink’s research, the “out of sight, out of mind” principle is indeed true when it comes to food.

4. Eat fruit on a colored plate.

One 2011 study conducted by Wansink found that kids were more likely to eat fruit if it was served in colorful bowls. Food presentation, it seems, affects perceptions of desirability.

Wansink somewhat scoffs at the idea of organic eating or fussing over the perfect meal. For the average busy individual %ndash; especially a working mom or dad – ease and convenience is often the most important factor in eating healthy.

Bagged green salads are the way to go, he suggests.

“There are people who are really against bagged salad,” Wansink said. “Purist cooks say, ‘You’re a lazy-head. You should be doing this yourself.’ That’s what my wife says. But when she’s not around, it’s often what I buy. It makes me a whole lot more likely to have a salad, because it takes three steps out of the process.”

More of Wansink’s tips on healthy eating can be found here.