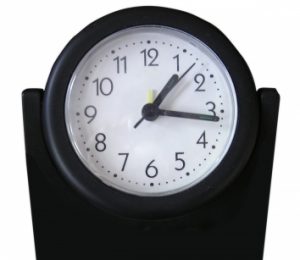 On any given day, most people eat for about 15 hours or longer.

That’s one of the key takeaways from a recent study that measured how a specific mobile app records food and beverage intake.

Over 150 participants were a part of the study, which also found that three meals a day aren’t the norm and that most people consume less than a quarter of the day’s calories before noon – and over a third after 6 p.m.

The app, myCircadianClock, was being tested as a way to measure how time of eating can affect health. The authors hypothesized that a time-restricted feeding schedule could prevent “metabolic jetlag” – where the body’s metabolic organs become inefficient because of the erratic times people eat.

Researchers also found that overweight participants who stuck to a timed eating window of 10-11 hours – without altering their normal diets – were able to lose about 3.5 percent of their body weight in 16 weeks. These participants also reported having better sleep and more energy.

The study is an example of how smartphone and mobile apps can impact health and weight, said first author Shubhroz Gill.

“One pleasant surprise was how many participants got used to taking a picture of anything they ate or drank; it almost became their second nature,” Gill said.

The app used in the study, MyCircadianClock, can be used by anyone who is willing to contribute his or her data to the ongoing research.