Primary Care Doctors Don’t Refer Eating Disorders As Much As They Should, Study Says 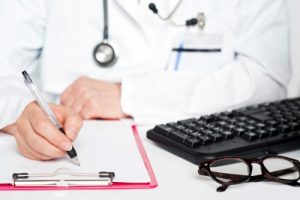 Primary care physicians play an important role in recognizing and diagnosing eating disorders, but many of them don’t refer patients to specialists when help is most needed, new research suggests.

A study presented at the Association for Behavioral and Cognitive Therapies’ annual conference found that doctors were able to identify eating disorders about 60 percent of the time – but only 40 percent of physicians recommended follow-up care with a mental health professional.

The real physicians were then asked to respond to the simulations, giving their feedback on what diagnoses they would give these “fake” patients if the simulations were real-life scenarios.

According to Stacey Cahn, lead study author and associate professor of psychology at Philadelphia College of Osteopathic Medicine, more research is needed to determine why so few doctors recommended follow-up care for patients with eating disorders.

“Doctors can be very intuitive when someone is reporting symptoms, but the problem might be that they are unsure of where exactly to refer their patient, and whether he or she will go (once referred),” Cahn said.

Since primary care physicians can play a powerful role in diagnosing eating disorders, more training might also be helpful in enabling them to spot the early warning signs and proceed appropriately.

“Primary care doctors receive only a minimal amount of training to recognize anorexia, so they’re not always primed on what to look for, and a patient rarely discloses that he or she has an eating disorder,” Cahn said.