Eat On The Go? Expect To Gain Weight 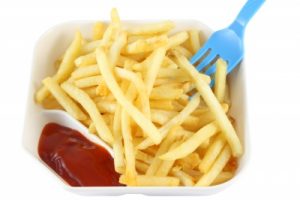 People who eat on the go are more likely to increase their food intake later in the day, according to a new study.

Researchers from the University of Surrey found that eating while walking around triggered overeating when compared with other forms of distractions, like watching TV or talking with a friend.

The study included 60 females who were considered “dieters” or “non-dieters.” The women were split up into three different groups and assigned to eat a cereal bar doing different activities: one group was asked to watch a segment of a television show, another was asked to walk around and the third was asked to sit with a friend and have a conversation.

After the activities, all of the women were given access to snacks, and researchers measured how much they ate.

The trap of mindless eating

Lead author Professor Jane Ogden explained that eating on the go – specifically walking – made participants overeat the most later in the day.

However, any form of distraction, Ogden said, can impact food choices and lead to weight gain.

“When we don’t fully concentrate on our meals and the process of taking in food, we fall into a trap of mindless eating where we don’t track or recognize the food that has just been consumed.”