Bullies And Their Victims Both At Risk For Eating Disorders 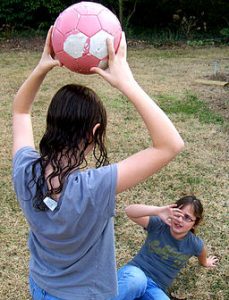 A child who is bullied could experience anxiety, depression and even develop an eating disorder. However, according to a new research study, it’s not only the victim of bullying that is at psychological risk, the bullies themselves can be too.

Being bullied during ones childhood has been associated with an increased risk for depression, anxiety and eating disorders. Researchers at Duke Medicine and the University Of North Carolina School Of Medicine were shocked to find in a study of 1,420 children, those who experienced bullying were twice as likely to display symptoms of bulimia, such as binging and purging, when compared to children who weren’t bullied.

The findings of the study were published in the December 2015 edition of the International Journal of Eating Disorders.

Lead study author Dr. William Copeland, associate professor of psychiatry and behavioral sciences at Duke University School of Medicine stated, “For a long time, there’s been this story about bullies that they’re more hale and hearty. Maybe they’re good at manipulating social situations or getting out of trouble, but in this one area it seems that’s not the case at all. Maybe teasing others may sensitize them to their own body image issues, or afterward, they regret their actions that results in these symptoms like binge eating following by purging or excess exercise.”

The findings of the study come from an analysis of interviews from the Great Smoky Mountain Study, a database with more than twenty years of health information on participants who enrolled at the age of nine. The information is considered a community sample and it is not representative of the United States population, but offers clues to how children ages 9-16 could be impacted.

The team was not surprised to find peer abuse victims were at an increased risk of eating disorders.

Children who are bullied were nearly two times as likely to risk displaying the symptoms of anorexia and bulimia. Children who were both bullied as well as engaged in bullying themselves, had the highest instance of anorexia symptoms and also the highest occurrence of binge eating.
However, the impact of bullying behavior on those who were bullies was also significant, with 30.8 percent of bullies having symptoms of bulimia compared to just 17.6 percent of children who weren’t involved in bullying.

Although many children experience lifelong effects from bullying, many seem to cope and succeed after such experiences. Dr. Copeland stated, “We want to do a better job of understanding why some people are able to experience the same things as others and be able to get through them without the same consequences. We really need to understand the resilience in those who have been bullied. That can help us determine the children who are going to need the most attention, and how we can promote those traits in others to increase their resilience.”