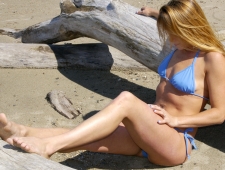 As an outsider, it can be difficult to understand why a thin anorexic sees a fat person in the mirror.

But recent research on brain imaging showed that people with body dysmorphic symptoms actually misjudge the way a body really looks–and that anorexics tend to have poorer “perceptual awareness” of their own figures.

In the study reported in Behavioral Brain Research, researchers used functional magnetic resonance imaging (fMRI), to look at two regions of the brain that are crucial in processing body images. In anorexic women, they found, these two regions had a weaker connection.

The study included 10 anorexic and 15 healthy women. Additionally, 10 control subjects that didn’t participate in the fMRI scans were asked to match images of the 25 other women with silhouettes that they thought most closely represented each woman’s weight and shape.

Structural changes cause a weak link

Then the researchers used the brain scan imaging to monitor the women while they looked at pictures of bodies, calculating the strength of connection between the “fusiform body area” (FBA) and the “extrastriate body area” (EBA) of the brain.

The weaker the connection, the more overweight the participants’ thought they were.

“In a previous study we found that there are structural changes in the brains of patients with anorexia,” said Prof. Dr. Boris Suchan. “They have a lower density of nerve cells in the EBA. The new data shows that the network for body processing is also functionally altered.”

The changes, Suchan says, could provide a clue toward just how anorexia develops.