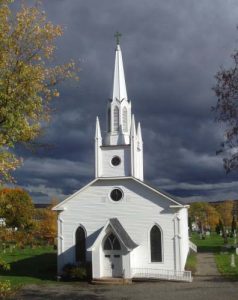 The study, conducted by researchers at Northwestern University, found that young adults who attended religious events on a regular basis were at a higher risk for becoming obese than their counterparts who did not attend as many religious activities or none at all.

The study followed two thousand four hundred and thirty-three young men and women ranging in age from twenty to thirty-two years old for a period of eighteen years. At the beginning of the study, all of the men and women were well within their normal weight range. By the end of the study, eighteen year later the men and women who had attended were found to be over weight and in many cases obese with a body mass index of thirty or greater. “Previous research by Northwestern Medicine has found a correlation between religious involvement and obesity in middle age and older adults.”

The researchers question whether all the potluck dinners have anything to do with the young adult’s obesity. In addition, the types of foods found at church potluck dinners are usually inexpensive to make for several people such as pasta. It is a rather odd link but the proof is there.